How much does it cost to travel to Arlington?

How much money will you need for your trip to Arlington? You should plan to spend around $211 per day on your vacation in Arlington, which is the average daily price based on the expenses of other visitors. Past travelers have spent, on average, $64 on meals for one day and $39 on local transportation. Also, the average hotel price in Arlington for a couple is $210. So, a trip to Arlington for two people for one week costs on average $2,956. All of these average travel prices have been collected from other travelers to help you plan your own travel budget.

A vacation to Arlington for one week usually costs around $1,478 for one person. So, a trip to Arlington for two people costs around $2,956 for one week. A trip for two weeks for two people costs $5,911 in Arlington. If you're traveling as a family of three or four people, the price person often goes down because kid's tickets are cheaper and hotel rooms can be shared. If you travel slower over a longer period of time then your daily budget will also go down. Two people traveling together for one month in Arlington can often have a lower daily budget per person than one person traveling alone for one week.


How expensive is Arlington? How much money do I need for Arlington?

How much does a trip to Arlington cost? Is Arlington expensive? The average Arlington trip cost is broken down by category here. All of these Arlington prices are calculated from the budgets of real travelers.

Looking for a hotel in Arlington? Prices vary by location, date, season, and the level of luxury. See below for options.

How much does it cost to go to Arlington? Naturally, it depends on the dates. We recommend Kayak because they can find the best deals across all airlines.

The price of renting a car in Arlington will depends on dates, the type of car, the location, and your age. We recommend Kayak because they can find the best deals across all car rental companies.

Affordable Hotels Near the Metro in Arlington, VAVirginia BeachNorfolkRichmondAlexandriaRoanoke

Arlington On a Budget 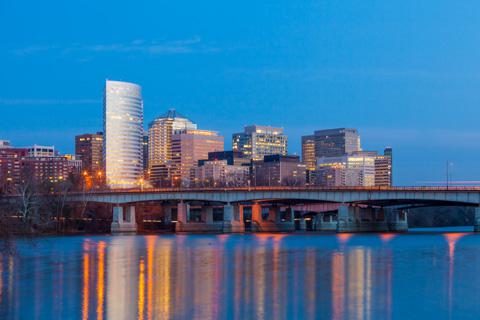 Arlington, Virginia
Located just across the Potomac River from Washington DC, capital of the United States, Arlington is a city that also has many government sites and monuments that commemorate the nation's past. Two of its most famous features include Arlington National Cemetery and the Pentagon-the largest office building in the world.

Arlington is perhaps most known for being home to the Arlington National Cemetery. This national military cemetery is famous for including John F. Kennedy's tomb and the house of General Robert E. Lee. Visitors come to explore the grounds and also watch the changing of the guard ceremony in front of the Tomb of the Unknown Soldier which occurs regularly on the hour for much of the year. The cemetery is adjacent to another renowned site of the United States-the Pentagon. Covering 4 zip codes, it is the largest office building in the world with tours available in certain areas-though security remains very tight. The city is also home to the Pentagon Memorial where Flight 77 hit in 2001, the Iwo Jima Marine Corps War Memorial, and the United States Air Force Memorial. The Arlington Historical Museum is also worth a visit, housed in a historic school building.

As for the surrounding nature, the Potomac River runs along the eastern border of Arlington. Theodore Roosevelt Island can be accessed from Arlington by a footbridge across the river and offers a pleasant nature walk in a little oasis of natural woods.

As far as shopping, dining, and entertainment goes, the neighborhoods to frequent in Arlington would be Clarendon, Shirlington, and Crystal City. Clarendon has the largest concentration of restaurants, plus a Wednesday farmer's market that features organic produce, baked goods, plants, herbs, homemade soaps and other items for sale. Additionally, it is host to local parades and celebrations especially on "Clarendon Day" on a Saturday in mid-October which features four live music stages, local food booths, clothing, jewelry, antiques and collectibles sales, children's games and rides, and other local traditions. This neighborhood is located just to the northeast of Arlington Cemetery, while hubs like Pentagon City and Crystal City are situated to the south of the Pentagon. Other prominent neighborhoods include Rosslyn, Lyon Village, Cherrydale, Virginia Square, and Ashton Heights.

Once you have exhausted the endless supply of historic sites and monuments that Arlington and the nearby DC area have to offer, the city has a few more activities up its sleeve that might appeal during your visit. Arlington Cinema & Drafthouse, for example, hosts a unique dining and entertainment experience where visitors can sit down to meals while inside a movie theatre. The venue also hosts live comedy shows and large-screen viewings of major sports events, plus a Drafthouse for those over the age of 22. Along the same lines as entertainment, the Synetic Theater at Crystal City shows many Shakespeare plays, while The Comedy Spot is host to stand up acts and local variety shows. The early shows at The Comedy Spot are family friendly, and the late shows are adult only.

If you're looking to get out and be a little more active, you might want to pop into the Kettler Capitals Iceplex for some ice skating. The rink is open to the public year-round and was built specially for the Washington Capitals professional hockey team. Of course, you can also get out by exploring the sights of the city on foot-a particularly peaceful spot being the small national park on Theodore Roosevelt Island.

While traditional Virginian cuisine consists of dishes like barbeque, Brunswick stew, peanut soup, and seafood closer to the coast, the city of Arlington has over a thousand restaurants that fit nearly every budget and taste. From contemporary American eats to ethnic varieties like Thai, Chinese, Indian, Japanese, Greek, Italian and many more, Arlington cuisine is abundant and diverse. The Clarendon neighborhood probably has the largest concentration of restaurants within a few blocks of the metro station, Shirlington neighborhood is a bit less crowded, while Crystal City has many options for dining as well. Some of the best restaurants as rated on TripAdvisor include Carlyle, Legal Sea Foods, Ray's the Steaks, El Pollo Rico, Ted's Montana Grill, Italian Store, Quarterdeck, Jaleo, Yayla Bistro, Silver Diner Clarendon, Liberty Tavern, and Harry's Smokehouse Burgers & BBQ.

By plane, Reagan National Airport is located within the city itself and served by several major regional airlines. It is also very well connected to the metro system. Dulles International Airport is the largest airport nearby, about 15 miles from Arlington. It can be reached via shuttle bus or taxi.

By train, the closest intercity station is Union Station in Washington, DC, located 10-15 minutes by taxi from Arlington, or 30 minutes by metro.