How much does it cost to travel to Roanoke?

How much money will you need for your trip to Roanoke? You should plan to spend around $131 per day on your vacation in Roanoke, which is the average daily price based on the expenses of other visitors. Past travelers have spent, on average, $38 on meals for one day and $18 on local transportation. Also, the average hotel price in Roanoke for a couple is $153. So, a trip to Roanoke for two people for one week costs on average $1,835. All of these average travel prices have been collected from other travelers to help you plan your own travel budget.

A vacation to Roanoke for one week usually costs around $917 for one person. So, a trip to Roanoke for two people costs around $1,835 for one week. A trip for two weeks for two people costs $3,670 in Roanoke. If you're traveling as a family of three or four people, the price person often goes down because kid's tickets are cheaper and hotel rooms can be shared. If you travel slower over a longer period of time then your daily budget will also go down. Two people traveling together for one month in Roanoke can often have a lower daily budget per person than one person traveling alone for one week.


How expensive is Roanoke? How much money do I need for Roanoke?

How much does a trip to Roanoke cost? Is Roanoke expensive? The average Roanoke trip cost is broken down by category here. All of these Roanoke prices are calculated from the budgets of real travelers.

Looking for a hotel in Roanoke? Prices vary by location, date, season, and the level of luxury. See below for options.

How much does it cost to go to Roanoke? Naturally, it depends on the dates. We recommend Kayak because they can find the best deals across all airlines.

The price of renting a car in Roanoke will depends on dates, the type of car, the location, and your age. We recommend Kayak because they can find the best deals across all car rental companies.

Roanoke On a Budget 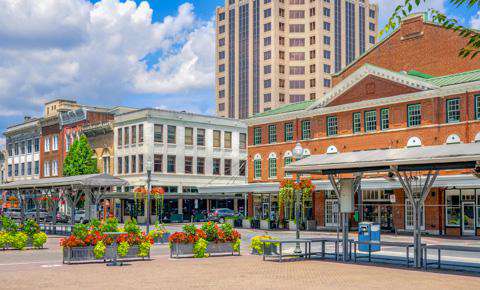 Roanoke, Virginia
Roanoke is a charming city located in the western region of the U.S. state of Virginia. Sometimes called the "Star City of the South" or the "Magic City," Roanoke lies in the scenic Roanoke Valley with Mill Mountain as a local icon, topped with a lighted 100-foot star. The city itself is home to many museums and opportunities for shopping, dining, and entertainment.

Roanoke is a city flourishing with culture, dotted with history, and surrounded by the beauty of the Appalachian Mountains just outside. Beginning in the Downtown district, some of the more historic sights one might come across include the Boxley Building, Campbell Avenue Complex, Colonial National Bank, First National Bank, Patrick Henry Hotel, and Fire Station No. 1 which was in operation from 1907 to 2007. There are also a handful of historic sub-districts in the downtown, plus museums dedicated to local and surrounding history. Center in the Square is one such museum and cultural center located on the City Market. Then there is the O. Winston Link Museum located in a former passenger rail station downtown, Taubman Museum of Art, as well as the Virginia Museum of Transportation which houses many Norfolk and Western Locomotives that used to run through Roanoke, and also features some aviation and automobiles.

As far as entertainment goes, some of the more notable venues include the Roanoke Civic Center, Jefferson Center, Grandin Theatre, and Mill Mountain Theatre. These centers host a variety of live performances, films, and shows throughout the year. You might also catch a movie at a local theatre, or enjoy the nightlife scene with live music in a handful of the downtown restaurants.

Taking a step back, Roanoke has some unique quirks on the grander scale. You might catch sight of a restored neon sign, Dr. Pepper H & C Coffee gleaming from the rooftops against the night sky. Or you might see the famed Mill Mountain Star, placed on a mountain overlooking the city in 1949. There is an accessible overlook nearby that offers beautiful views of the city, especially at night.

Downtown Roanoke is the central business district of the city, first beginning to grow with the completion of the Shenandoah Valley Railroad in 1882. Today, the downtown has evolved into a center of activity for just about everything with a handful of places on the National Historic Register, hotels, museums, parks, and plenty of options for shopping and dining. One of its focal points has become the City Market-a market for fresh produce, plants, crafts, gifts, arts, collectibles, and more open year-round 7 days a week. It is located in the heart of Downtown Roanoke at the intersection of Campbell Avenue and Market Street. Elmwood Park is the downtown's premier concert and festival venue, while smaller live music performances can be heard every night in several of the downtown restaurants. There are plenty of galleries and studios for those interested in the art scene, and a few theatres providing further entertainment in the performing arts.

Roanoke offers opportunities for sight-seeing, shopping, dining, and entertainment to compete with any city. The culture is alive with museums, galleries, and performing arts, the streets are always bustling with visitors and locals enjoying the market scene and activities out on the town, and throughout the year, Roanoke hosts parades, festivals, and concerts for all to enjoy.

Just outside city limits, there are also opportunities to get closer to nature. The Appalachian Trail is just minutes away, along which you can find opportunities for boating, camping, fishing, and hiking. Mill Mountain overlooking the city is surrounded by a regional park for outdoor recreation activities. There is also the Mill Mountain Zoo atop the mountain which is home to about 160 animals, and hosts programs and events regularly.

As far as food goes, some of the more traditional meals in Virginia include dishes like barbeque pork, Brunswick stew, and peanut soup-which was especially popular during colonial times. Desserts like marble cake and shoofly pie come largely from the Pennsylvania Dutch, while fried peaches with vanilla ice cream is considered a more upscale dessert. And, of course, the closer you get to the coast, the more likely you will able to indulge in fresh seafood dishes. Being a city, Roanoke features restaurants that cater to all budgets and flavors of the world. Some of the more classic hometown eats can be found at places like Local Roots, Hollywood's Restaurant & Bakery, and Mission BBQ; finer dining options include Billy's or the Regency Dining Room, while Cedars Lebanese Restaurant Southern Comfort on the Market offer menu items that are internationally inspired.

By plane, the nearest airport is the Roanoke-Blacksburg Regional Airport with service to Washington, Detroit, Atlanta, Philadelphia, Charlotte, Chicago, Tampa area (St. Petersburg), and New York. It is located about 10 minutes from the downtown right next to Valley View Mall.

By bus, there is a Greyhound station located on Campbell Avenue in downtown Roanoke.

There is no train service directly to Roanoke, but the nearest Amtrak stops are in Lynchburg and Clifton Forge, both within a two-hour drive of the city.

By car, Roanoke is at exit 146 on I-81, about 40 minutes northeast of Blacksburg, and 40 minutes south of Lexington. It is about a 4-hour drive from Washington and 3 hours from Richmond.