How much does it cost to travel to Norfolk?

How much money will you need for your trip to Norfolk? You should plan to spend around $133 per day on your vacation in Norfolk, which is the average daily price based on the expenses of other visitors. Past travelers have spent, on average, $39 on meals for one day and $44 on local transportation. Also, the average hotel price in Norfolk for a couple is $135. So, a trip to Norfolk for two people for one week costs on average $1,863. All of these average travel prices have been collected from other travelers to help you plan your own travel budget.

A vacation to Norfolk for one week usually costs around $932 for one person. So, a trip to Norfolk for two people costs around $1,863 for one week. A trip for two weeks for two people costs $3,727 in Norfolk. If you're traveling as a family of three or four people, the price person often goes down because kid's tickets are cheaper and hotel rooms can be shared. If you travel slower over a longer period of time then your daily budget will also go down. Two people traveling together for one month in Norfolk can often have a lower daily budget per person than one person traveling alone for one week.


How expensive is Norfolk? How much money do I need for Norfolk?

How much does a trip to Norfolk cost? Is Norfolk expensive? The average Norfolk trip cost is broken down by category here. All of these Norfolk prices are calculated from the budgets of real travelers.

How much do vacation rentals cost in Norfolk? Prices vary by location, date, size of the place, and the level of luxury. See below for options.

How much does it cost to go to Norfolk? Naturally, it depends on the dates. We recommend SkyScanner because they can find the best deals across all airlines.

The price of renting a car in Norfolk will depends on dates, the type of car, the location, and your age. We recommend SkyScanner because they can find the best deals across all car rental companies.

Norfolk On a Budget

Norfolk, Virginia
The city of Norfolk in the U.S. state of Virginia is a port city holding a large Navy and shipping presence in its harbor. With a long history as a strategic military point, Norfolk is home to the largest Navy base in the world, Naval Station Norfolk. Other attractions include opportunities for dining, shopping, and entertainment as well as many parks and memorials.

With a history dating back to colonial years, the city of Norfolk has much to see in the form of architecture. Churches make up some of the more impressive examples with many like the Basilica of Saint Mary of the Immaculate Conception, which stands tall with white steeples. Others include the Christ & St. Luke's Episcopal Church from 1910, the Freemason Street Baptist Church from 1850, and the 1739 St. Paul's Episcopal Church which has a cannon ball fired by Lord Dunmore in 1776 still lodged in the church wall today. The Ghent Historic district houses many of these buildings and more.

As a long-time time port, there is also much to see related to the place's maritime past. The Hampton Roads Naval Museum has an exhibit that interprets the lengthy history of the U.S. Navy in southeast Virginia and northeast North Carolina, while the Nauticus and the Battleship Wisconsin is open as a maritime-themed science center and museum. Visitors can also opt to take a tour of the Naval Station to see aircraft carriers and other large ships, conducted by Naval personnel.

The Downtown Norfolk waterfront is the historic district of the city. It has always been a center for port activity-shipping, military, and otherwise-and today serves as a bustling hub for just about anything a tourist could want. Not only is there an impressive collection of landmarks and museums, but there are also opportunities to entertain for days with multiple theatres, a zoo, cruises on the water, and more. Shopping and dining are both varied and diverse, catering to the many tastes and palettes of all who visit Norfolk. Granby Street is the main thoroughfare through the downtown and is lined with many restaurants and bars. Ghent is a historic district adjacent to downtown, and is filled with historic homes, tree-lined streets, and beautiful old churches. And then there is Ocean View, Norfolk's beach community for those looking to soak up the sun.

In a city like Norfolk, activities range from museums and historic sight-seeing to ocean cruises and beach-bumming. Ocean View is the prime neighborhood for the beachgoers, situated right on the Chesapeake Bay. It is often a quiet escape from the crowds at Virginia Beach, and has a nice pier for fishing.

As far as entertainment goes, Chrysler Hall brings Broadway to Norfolk, having hosted shows like Wicked, American Idiot, The Book of Mormon, Lion King, and Phantom of the Opera. Attucks Theatre is nicknamed the Apollo Theatre of the South, Wells Theatre and the Virginia Stage Company is a venue of the performing arts, and Harrison Opera House hosts events run by the Virginia Opera as well as concerts, musicals, and Broadway shows.

If you are big on the culinary scene you may want to come into the city during the Downtown Norfolk Restaurant Week, sample some local brews on the Ghent Bar Tour, or visit the O'Connor Brewing Company for a taste and tour of the homegrown brewery.

While traditional Virginian cuisine consists of dishes like barbeque, Brunswick stew, colonial peanut soup, and seafood closer to the coast, Norfolk is a city with a happy mix of it all. For the saucier side of things, one might stop in at a place like Belmont House of Smoke or Doumar's Cones & Barbecue. But if its seafood you crave, a few Norfolk staples include A.W. Shucks, Capt. Groovy's Grill and Raw Bar, and 456 Fish. Other top restaurants, as rated on TripAdvisor include No Frill Bar and Grill, Freemason Abbey Restaurant, Handsome Biscuit, and Grilled Cheese Bistro. Norfolk is a place packed with flavors from all walks of the world, thrown in with a splash of southern flare.

By train, Amtrak offers train service to Norfolk as part of the Northeast Regional service that runs from Boston south to Washington, DC and various points in Virginia.

Norfolk can also be reached by passenger ferry from Portsmouth. 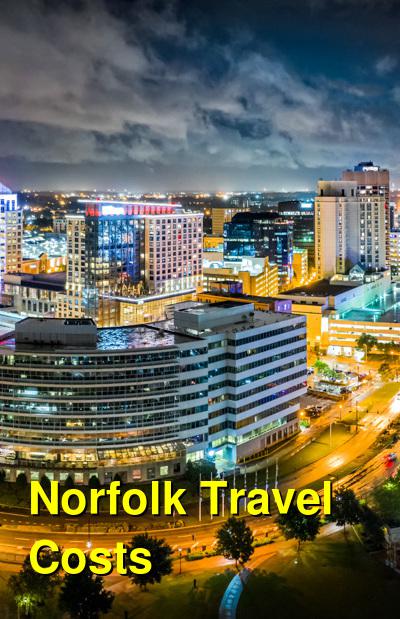