How much does it cost to travel to Charlottesville?

How much do vacation rentals cost in Charlottesville? Prices vary by location, date, size of the place, and the level of luxury. See below for options.

How much does it cost to go to Charlottesville? Naturally, it depends on the dates. We recommend Kayak because they can find the best deals across all airlines.

The price of renting a car in Charlottesville will depends on dates, the type of car, the location, and your age. We recommend Kayak because they can find the best deals across all car rental companies.

Charlottesville On a Budget 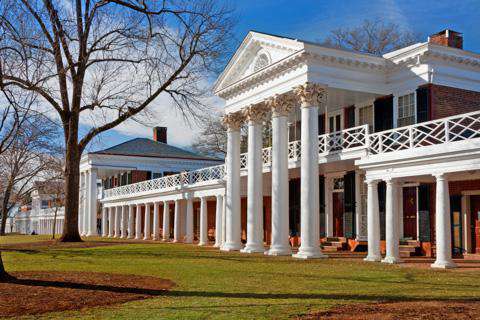 UVA at Charlottesville, Viginia
Located in central Virginia, Charlottesville is a little university town steeped in history and culture. Home to Thomas Jefferson, much of the town's architecture is heavily influenced by his hand, while the people scene is full of activities, dining, and entertainment. Many visitors are drawn to the area for the University of Virginia, the Historic Downtown Mall, plus many quaint vineyards and farms in the surrounding countryside.

The University of Virginia, also known as "Mr. Jefferson's University," is renowned for having one of the most beautiful college campuses on the east coast. The architecture was designed by Jefferson himself, in his signature style of brick structure with grand white columns. Visitors often take a walk along the Lawn to admire the campus and its buildings, especially the iconic Rotunda.

Monticello is another notable sight of Charlottesville, also complete in Jeffersonian architecture. Featured on the U.S. nickel, Monticello encompasses the residence of Thomas Jefferson, the gardens, servant quarters, and Jefferson's grave. Another famous residence is that of James Monroe, called Ash Lawn-Highland, and is open daily.

The Virginia Discovery Museum is also fun place for the family to visit. It located on the Downtown Mall, which in itself is an attraction (more below).

Finally there is the countryside surrounding Charlottesville. Drive just west of the city and you will come across farms, fences, horses, and vineyards reminiscent of the 18th century when Jefferson called this place home. The general area is especially beautiful in the fall when the colors are at their peak. The country west of town, the hills to the south, Skyline Drive, and the Blue Ridge Parkway are all great routes for taking in the autumn scenery. Another recommended route is the Monticello Wine Trail where you can visit wineries and vineyards.

The historic downtown Charlottesville is a hub for most leisurely activities in the city. Centered on a brick-paved pedestrian area and surrounded by restored and renovated buildings, the downtown offers a charming little example of a classic town in the American South. The Downtown Mall encompasses this area with more than 120 shops and 30 restaurants housed in historic buildings on and around Main Street. Many of the restaurants offer dining al fresco with views of the busy passersby, beautiful fountains, shady oak trees, and historic streets. The downtown is also a center for shopping with many unique boutiques and storefronts, and had much to offer in entertainment with movies and plays showing regularly at the local theaters.

As far as activities go, Charlottesville is a place of history with much in the avenue of historic sight-seeing, but also thriving with the fun and entertainment of a city. Once you've had your fill of Jeffersonian architecture, enjoyed the bustling activity of the Downtown Mall, and have had a chance to roam the rolling countryside beyond city limits, there are a few more opportunities that the city has to offer. You might hop on a hot air balloon through Boars Head Country Club, or ice skate in the chillier season at the Main Street Arena. There are all kinds of dance clubs and societies to get you grooving with social, ballroom, swing, or salsa and there are plenty of festivals held throughout the year, some of which include Charlottesville Dogwood Festival in the spring, The Ash Lawn Opera Festival in the summer, The Virginia Film Festival in late October, and The Jeffersonian Thanksgiving Festival in late November.

As far as food goes, some of the more traditional meals in Virginia include dishes like barbeque pork, Brunswick stew, and peanut soup-which was especially popular during colonial times. Desserts like marble cake and shoofly pie come largely from the Pennsylvania Dutch, while fried peaches with vanilla ice cream is considered a more upscale dessert. And, of course, the closer you get to the coast, the more likely you will able to indulge in fresh seafood dishes. In Charlottesville there are a ton of great restaurants offering a variety of cuisines at reasonable prices. With the University of Virginia nearby, the downtown area is a nice little hub to enjoy a meal. Some of the top-rated restaurants on TripAdvisor include places like the Ivy Inn Restaurant, Citizens Burger Bar, Hamiltons'at First and Main, Downtown Grille, Mel's Cafe, Sultan Kebab, Old Mill Room, Public Fish and Oyster, The Local, and Burtons Grill. Michie Tavern is a great place to visit for the history buffs-dating back to 1784 as an inn the place is now a museum and restaurant with some of the best fried chicken around.

By train, Charlottesville is on the Cardinal, Crescent, and Northeast Regional routes for Amtrak. The station is on West Main Street, about halfway between the Downtown Mall and the University.

By car, the major highways leading into Charlottesville are US-29 and I-64, which runs through the city in an east-west direction.

By bus, there is a Greyhound station on West Main Street.