How much does it cost to travel to Boca Raton?

How much money will you need for your trip to Boca Raton? You should plan to spend around $226 per day on your vacation in Boca Raton, which is the average daily price based on the expenses of other visitors. Past travelers have spent, on average, $54 on meals for one day and $61 on local transportation. Also, the average hotel price in Boca Raton for a couple is $273. So, a trip to Boca Raton for two people for one week costs on average $3,168. All of these average travel prices have been collected from other travelers to help you plan your own travel budget.

A vacation to Boca Raton for one week usually costs around $1,584 for one person. So, a trip to Boca Raton for two people costs around $3,168 for one week. A trip for two weeks for two people costs $6,335 in Boca Raton. If you're traveling as a family of three or four people, the price person often goes down because kid's tickets are cheaper and hotel rooms can be shared. If you travel slower over a longer period of time then your daily budget will also go down. Two people traveling together for one month in Boca Raton can often have a lower daily budget per person than one person traveling alone for one week.


How expensive is Boca Raton? How much money do I need for Boca Raton?

How much does a trip to Boca Raton cost? Is Boca Raton expensive? The average Boca Raton trip cost is broken down by category here. All of these Boca Raton prices are calculated from the budgets of real travelers.

Looking for a hotel in Boca Raton? Prices vary by location, date, season, and the level of luxury. See below for options.

How much does it cost to go to Boca Raton? Naturally, it depends on the dates. We recommend Kayak because they can find the best deals across all airlines.

The price of renting a car in Boca Raton will depends on dates, the type of car, the location, and your age. We recommend Kayak because they can find the best deals across all car rental companies.

Boca Raton On a Budget 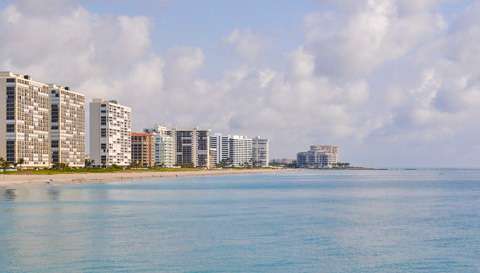 Boca Raton, Florida
An affluent city with a reputation for catering to the well-to-do, Boca Raton is a beautiful city in Southern Florida with plenty to offer for all tastes and budgets. Boca's warm weather climate has visitors flocking to its many beaches and parks each day, while others take advantage of the golf courses, spas, annual events, festivals, live shows, museums, shopping, dining, and more.


Boca Raton's eastern coast has two-miles of beaches, most notably including Red Reef Park and South Inlet Park. Red Reef Park is home to the Gumbo Limbo Environmental Complex, an environmental education center which features sea tanks, a butterfly garden, a boardwalk trail with hammocks and an observation tower, as well as a research facility where students study sea wildlife, sea vegetation, and other marine-related subjects. South Inlet Park has picnic tables, pavilions and playgrounds, and a scenic jetty, South Beach is a common spot for swimming and surf-fishing, and Spanish River Beach is popular with the younger crowds.

There are also several public parks with amenities from amphitheaters and playgrounds to golf courses and nature centers. South County Regional Park, for example, includes the Osprey Point Golf Course, a dog park, the Sunset Cove Amphitheater, the Coconut Cove Waterpark, and the Daggerwing Nature Center. Sugar Sand Park is another popular location, especially for kids, home to the Children's Science Explorium, as well as a carousel, ball parks, and other attractions.

Boca Raton has a few neighborhood hubs where visitors and locals alike indulge in the local culture, food, and shopping. One such place is the Town Center at Boca Raton, an upscale retail mall which includes high-end stores such as Louis Vuitton, Burberry, and Tiffany & Co as well as a selection of great restaurants. Mizner Park is another thriving center located in downtown Boca Raton. The area contains several stores and fashion boutiques, restaurants, a movie theater, art galleries, and more. The Center for the Arts at Mizner Park is also home to the Boca Raton Museum of Art and the Count de Hoernele Amphitheater, which occasionally hosts concerts and events. Other venues for concerts and shows include the Carole and Barry Kaye Performing Arts Auditorium and the Sunset Cove Amphitheater.

Boca Raton is a place with things to do all day and all night, indoors and out. By day, once might laze around the beach, swim or surf offshore, hop on a boat trip, or visit one of the local nature centers for an experience closer to the native wildlife culture. By night, see a show or movie, indulge in some of the local flavors, get lost amidst the shopping centers, or visit one of Boca's art galleries or museums. There are tours on land or by sea, escape rooms, spas, golf courses, sporting events, annual festivals, and more to entertain visitors of all kinds.

While the city may have a high-class reputation, Boca Raton offers good food to satisfy all tastes and budgets. From cafes, pizzerias, and delis, to farm-to-table restaurants, steakhouses, Thai cuisine, seafood bistros, and more, Boca is home to a variety of options to please the palette. The city is even the birthplace of the vegetarian Boca Burger, though it is not offered in every restaurant. Other favorites for visitors include Florida orange juice, saltwater taffy, key lime pie, and of course, seafood. Like any major vacation destination, Boca Raton has just about every kind of restaurant imaginable, and being on the water also makes it a great place to sample fresh fish and seafood. Some of the top restaurants in Boca Raton as rated on TripAdvisor include Twenty Twenty Grille, Star, The Capital Grille, Abe & Louie's, Season 52, Ichiyami Buffet and Sushi, Truluck's, Max's Grille, City Fish Market, and Houston's. As mentioned earlier, the best concentration of dining options can be found in places like the Town Center at Boca Raton and Mizner Park.

By car, Boca Raton can be reached via Interstate-95 on the exits for Palmetto Park Road, Glades Road, Yamato Road and Congress Avenue. It is also off of the Glades Road exit from Florida's Turnpike.

By rail, there is a train station at 680 Yamato Rd, served by Amtrak and TriRail.