How much does it cost to travel to Cumberland Island National Seashore?

Looking for a hotel in Cumberland Island National Seashore? Prices vary by location, date, season, and the level of luxury. See below for options.

How much does it cost to go to Cumberland Island National Seashore? Naturally, it depends on the dates. We recommend Kayak because they can find the best deals across all airlines.

The price of renting a car in Cumberland Island National Seashore will depends on dates, the type of car, the location, and your age. We recommend Kayak because they can find the best deals across all car rental companies. 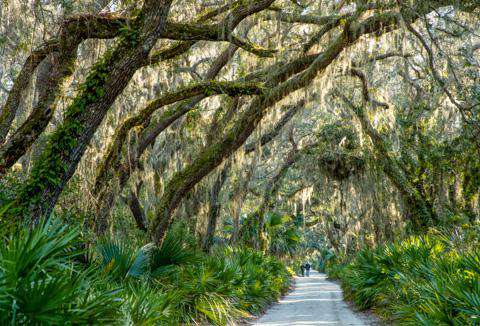 Cumberland Island
The Cumberland Island National Seashore, located on the southern coastline of Georgia, preserves an island of beaches and dunes, marshes, and freshwater lakes. It is also home to many historic sites and structures, preserved and interpreted for visitors to explore.

Beyond the protected natural beauty of the island's scenery and wildlife, the place is also host to a handful of abandoned historic sites worth a visit. The Dungeness Ruins, for example, on the south side of the island are all that remain of a four-story tabby home built in 1783. The structure was rebuilt in 1884 by the Carnegies, but burned in 1959 and was left in ruins as it stands today.

Plum Orchard Mansion is much more preserved Georgian Revival mansion, built in 1898 and covering 20,000 square feet. It is about 8 miles north of the Sea Camp ferry dock, and can only be reached on foot, by bike, or on the Land & Legacies Tour via passenger van. Another 9 miles north, there is also the first African Baptist Church in the Settlement, which was established in the 1890s for African American workers. It was also the site of the 1996 wedding of John F. Kennedy, Jr. and Carolyn Bessette.

If you're looking to understand a bit of the island's history before setting out to explore, visit the Ice House Museum which showcases original artifacts and replicas from the island's prehistoric, colonial, early American, and Gilded Era histories.

Sea Camp Campground is the largest and most developed place to stay on the island. Located just half a mile from the Ranger Station and Sea Camp dock on which you will arrive, this campground often fills its 16 camp sites. Sites include picnic tables, food cages, and designated fire rings with grills. There are also restrooms with running, drinkable water, as well as showers (though they are not heated). It is also a prime location for beach access on the Atlantic Ocean. Stafford Beach Campground, located a bit further north, is smaller and more primitive-though there are still restrooms and fire rings available. And then, for the real prepared adventurers, there are a few wilderness campgrounds with no amenities. These include Hickory Hill 5.5 miles north of dock in the middle of the maritime forest, Yankee Paradise 7.5 miles north of dock about one mile from the Plum Orchard Mansion, and Brickhill Bluff 10.5 miles north of dock located on a short bluff overlooking the Brickhill River.

Being a well-protected environment, reachable only by ferry, the Cumberland Island National Seashore is a destination for visitors to get away into the wilderness. As mentioned earlier, there are many historical points of interest that act as waypoints for those traversing the island on foot or by bike. Hiking, camping, and backpacking are some of the best ways to really experience the unique environment that the place has to offer-beaches, dunes, marshes, maritime forests, and freshwater lakes frequented by a diverse array of native wildlife.

If you prefer a more guided, less grueling exploration of the island, there is also the Land and Legacies Tour that takes visitors by passenger van to historic locations around the seashore including Plum Orchard Mansion, the Settlement (including the First African Baptist Church), Cumberland Island Wharf, and other sites along the main road. Tours are offered on days when the ferry is operating with a fee of $45.00 plus tax per person.

There are no sources for supplies once you reach the Cumberland Island National Seashore, and so it is important to stock up on food, drinks, sunscreen, insect repellant, and comfortable clothing before you board the ferry. The only resources available are a few places to refill water bottles. The town from which the ferry leaves is called St Marys, and there are plenty of opportunities for stocking up on supplies and dining here as well. Some of the best restaurants in town, as rated on TripAdvisor, include St Marys Seafood & More, Riverside Cafe, Lang's Marina Restaurant, and The Blue Goose. Being so close to the coast, seafood makes up much of the local cuisine. Some favorites include dishes that involve shrimp, oyster, fried pickles, crab cakes, po boy, crawfish, catfish, and grits.

The only airport on the island is Stafford Airport for private use only, unless permitted otherwise. St Marys Airport is the next nearest, open for public use.

As far as major airports go, the closest is Jacksonville International Airport in Florida, which is served by Air Canada Express, Allegiant Air, American Airlines, American Eagle, Delta Airlines, Delta Connection, JetBlue Airways, Silver Airways, Southwest Airlines, United Airlines, and United Express. It is located about 30 miles south of St Marys, GA via I-95, from which you can take a ferry to the Cumberland Island National Seashore.

Once on the island, walking is the only method of transportation. Bikes are also available to rent.