How much does it cost to travel to Saint Simons?

How much money will you need for your trip to Saint Simons? You should plan to spend around $141 per day on your vacation in Saint Simons, which is the average daily price based on the expenses of other visitors. Past travelers have spent, on average, $38 on meals for one day and $39 on local transportation. Also, the average hotel price in Saint Simons for a couple is $160. So, a trip to Saint Simons for two people for one week costs on average $1,974. All of these average travel prices have been collected from other travelers to help you plan your own travel budget.


How expensive is Saint Simons?

How much does it cost to go to Saint Simons? Naturally, it depends on the dates. We recommend SkyScanner because they can find the best deals across all of the airlines.

How much do tours to Saint Simons cost? Multi-day tours can often be an effecient way to see the highlights of a country or region.

Find a hostel, guesthouse, or B&B in Saint Simons

Saint Simons On a Budget

St. Simon's Island, Georgia
Located just off the coast of southern Georgia, Saint Simons Island is the largest of the stateĀ’s renowned "Golden Isle's." Visitors are drawn to the Island for its warm climate, beaches, variety of outdoor activities, shops and restaurants, historical sites, and its natural environment. With most of the natural marsh and woodlands to the north and the commercial attractions centralized in the south, Saint Simons has a little taste of everything for all who come to see it.

On the north end of the island, besides the beauty of untouched ecosystems, one of the main attractions is the Fort Frederica National Monument. Established by General James Edward Oglethorpe in 1736, the fort was meant to protect the Georgia border from Spanish invaders to the south. The history of the community that lived there and the battles that were waged is one of great importance to the island. Also nearby is the Christ Church, a beautiful Episcopal church at which Methodism founder John Wesley preached to the Frederica congregation. The historic chapel is quaint, set upon enchanting grounds with shady trees draped with Spanish Moss.

On the south end of the island, the Saint Simons Island Lighthouse stands as the major landmark. The historic coastal property also houses a museum with educational exhibits about the islandĀ’s beginnings as well as its maritime history. Visitors can also tour the lighthouse itself, with great views from the top.

Saint Simons Pier Village is the southernmost neighborhood on the island. Located just off the beach, the area is rich in shopping and dining, like any good resort town should be. The entire village is walkable with unique shops from bookstores and jewelry boutiques to sweet shops and bakeries, in addition to the restaurants that cater to lunch and dinner. Throughout town there are also little apartments and coastal homes, some available to rent for vacationers and others the homes of the island residents. There is also a public park and parking area near the water by the fishing pier, as well as an outdoor, ocean-side, pool open to the public, located right next to the Saint Simons Island Lighthouse.

With bike paths lining every major street on the island, cycling is a common way to navigate and take in the sights of Saint Simons Island. Fishing and crabbing are also very popular, especially from the fishing pier at the end of Mallery Street in the Pier Village. Sea kayaking and canoeing are a great way to explore the waterways of the island, with tours operated by Southeast Adventure Outfitters if you are looking for a more guided experience. Other prevalent water activities on the island include boating, deep sea fishing, angling, swimming, windsurfing, birdwatching, beachcombing, and parasailing.

Saint Simons Island is also home to seven golf courses, which makes it a destination known to golfers around the world. The PGA TourĀ’s RSM Classic (formerly McGladrey Classic), is held annually in November at the Sea Island Golf Club on St. Simons Island.

As far as events go, there are frequent arts, crafts, and antiques festivals on weekends in the Village area of the south end. Over the Fourth of July weekend, the Village hosts the Sunshine Festival, with a noteworthy fireworks display in the evening. In the spring and summer months, the Jazz in the Park series is held Sundays on the lawn of the St. Simons lighthouse, and in temperate weather it is common to hear music jam sessions in Neptune Park in the Village. Bluegrass music is usually featured on Tuesdays during this time.

While Georgia is known for is low country cooking and barbeque, the closer you get to the coast the more likely you are to come across the southern take on seafood. Being an island, Saint Simons offers restaurants that serve fresh local catches every day. The Half Shell, CrabdaddyĀ’s Seafood Grill, and Iguanas Seafood Restaurant all serve dishes like crab bisque, Cajun-style peel & eat shrimps, shrimp and grits, oysters, crab cakes, scallops, clams, and po boy that will have you feeling like a true Georgian southerner. And if you are craving the savory sauces, a place like Southern Soul Barbeque specializes in oak-smoked meats and homemade BBQ sauces to satisfy that pang. Other notable restaurants include PalmerĀ’s Village CafĆ©, Halyards, Tramici, and Barbara JeanĀ’sĀ—a homey diner featuring Southern favorites, seafood dishes, and renowned crab cakes.

Saint Simons Car Rental Prices
Compare prices across all major rental companies:
There is a small airfield on the south end of the island called Malcolm McKinnon Airport that serves private planes. Brunswick Golden Isles Airport is the next nearest with commercial service, with planes to and from Atlanta by Delta Airlines. As far as major airports go, the nearest are Savannah/Hilton Head International to the north and Jacksonville International to the south in Florida. Each one is about 1.5 hours from Saint Simons by car, via I-95.

The only access to the island itself by road is The F.J. Torras Causeway, and a bridge arching high over the channel to allow large ships to pass.

Once on the island, walking and biking are the best ways to get around. 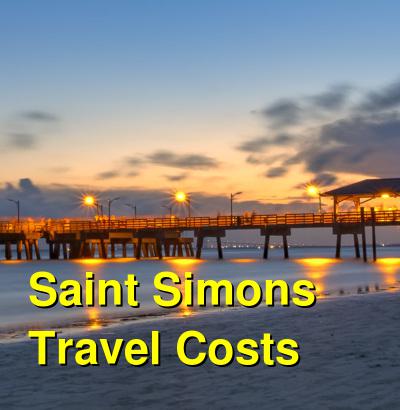