How much does it cost to travel to Bamberg?

How much money will you need for your trip to Bamberg? You should plan to spend around €101 ($110) per day on your vacation in Bamberg, which is the average daily price based on the expenses of other visitors. Past travelers have spent, on average, €33 ($36) on meals for one day and €11 ($12) on local transportation. Also, the average hotel price in Bamberg for a couple is €120 ($130). So, a trip to Bamberg for two people for one week costs on average €1,420 ($1,544). All of these average travel prices have been collected from other travelers to help you plan your own travel budget.

A vacation to Bamberg for one week usually costs around €710 for one person. So, a trip to Bamberg for two people costs around €1,420 for one week. A trip for two weeks for two people costs €2,840 in Bamberg. If you're traveling as a family of three or four people, the price person often goes down because kid's tickets are cheaper and hotel rooms can be shared. If you travel slower over a longer period of time then your daily budget will also go down. Two people traveling together for one month in Bamberg can often have a lower daily budget per person than one person traveling alone for one week.


How expensive is Bamberg? How much money do I need for Bamberg?

How much does a trip to Bamberg cost? Is Bamberg expensive? The average Bamberg trip cost is broken down by category here. All of these Bamberg prices are calculated from the budgets of real travelers.

Looking for a hotel in Bamberg? Prices vary by location, date, season, and the level of luxury. See below for options.

How much does it cost to go to Bamberg? Naturally, it depends on the dates. We recommend Kayak because they can find the best deals across all airlines.

The price of renting a car in Bamberg will depends on dates, the type of car, the location, and your age. We recommend Kayak because they can find the best deals across all car rental companies.

Bamberg On a Budget 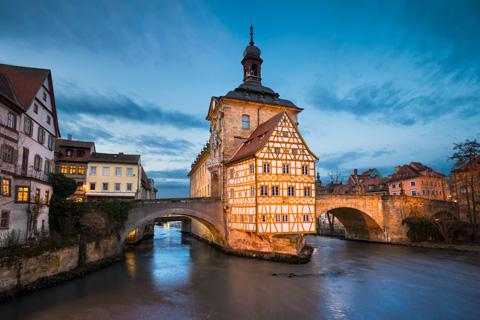 Bamberg, Germany
Amidst the rolling green hills and clear blue skies, you find yourself in a town that holds a certain magic in the air that leaves you in an intoxicated languor. Quaint, picturesque, charming - from its medieval and baroque architecture to its breathtaking gardens, the romantic flair of Bamberg, Germany is simply spell-binding. One of Europe's largest intact old town centers, Bamberg is located in northern Bavaria, established over 7 hills where the rivers of the Regnitz and Main conjoin. Preserving structures from the 11th to 19th centuries, Bamberg was named a UNESCO World Heritage Site since 1993. The town is filled to the brim with arts and culture, holding the world-renowned Bamberg Symphony Orchestra as well as such festivities as the international magician and street performers' festival. A gorgeous countryside town, Bamberg also provides its guests with many metropolitan amenities such as restaurants, cafes, malls, and antique shops. Whether it be beer gardens or nature parks, Bamberg has it all!

If you are looking to indulge in a little spending spree, just step outside of the Bamberg Cathedral, and a shopping experience like no other awaits you! Bamberg is known for its antique shops, so if you are a lover of the vintage, you are sure to find miraculous little treasures in this town. Nevertheless, surrounding the Bamberg Cathedral, there are shops of all kinds, with more than a dozen antique shops and a multitude of galleries. Many of these shops sell a motley crew of products, such as SebÃ¶k, Untere KÃ¶nigstrasse 21, that sells paintings, books, furniture, fine jewelry, silver, glass, toys, watches, clocks, and more. Other stores like the TÃ¶pferladen Irene Herold, Untere BrÃ¼cke 1, sell handmade ceramics like candleholders, cups, dinnerware, vases, and garden statuary. Around this area, auctions are held every 2 months where you can find all sorts of fascinating collectibles and artworks. Find something old and something new in Bamberg's shopping district!

Bamberg also provides its locals and visitors with gourmet meals, such as at the fine eatery of Fellini Ristorante. Founded by chef Massimiliano Zucchi, Fellini Ristorante provides its patrons with the culinary delights according to the traditional "Cucina Italiana." From market-fresh ingredients to friendly, attentive service, you will find a deep affection for this cozily designed restaurant and stunning garden. The meals prepared at Fellini Ristorante come from all regions of Italy, especially the region of the Campania, where Massimiliano learned the traditional forms of cooking that are now so apparent in his restaurant. Besides its pristine Italian cuisine, Fellini Ristorante also offers 90 excellent wines from only the most select wineries, with some of these bottles including the rare Sassicaia or the much beloved Grappe. Enjoy the romantic atmosphere of a high-class Italian affair at Fellini Ristorante.

Getting around Bamberg is relatively straightforward with some of its most popular regions, such as the Altstadt, to be easily accessible by foot. However, be weary of the traffic lights as cars are not known to look out for careless pedestrians. Nevertheless, if you find your feet getting sore from exploring the hilly terrain of Bamberg, the town provides a dense bus network that includes a wide variety of tickets to and from Bamberg, such as VGN Day Ticket, Bayern Ticket, and Schones-Wochenende-Ticket. There is also a train station that is located 0.7 miles from the Altstadt that provides a plethora of trips you can take. No matter where you go or how you decide to get there, Bamberg will be a pleasant experience for all!

By backpackguru in Entertainment
A must see site in Bamberg is the Kaiserdom, or "Dom", a cathedral originally completed in 1012 on Domplatz with a great view of the town. It can be seen from a great distance. The original construction has burned down twice, so the building seen to day was finally constructed in the 13th century. It's architecture style is a combination of Romanesque and Gothic.

The cathedral also comes with a very impressive collection of statues, with the most recognizable the Bamber Rider. This is a not to be missed site in Bamberg.

By backpackguru in Intercity Transportation
You can get to Bamberg on Deutsche Bahn which makes frequent connections between Bamberg and Wurzburg, Nuremberg, and Bayreurth. There are also a few express trains you can catch from Munich or Berlin. The service is quite dependable and reliable. You can check out the website for more information.