How much does it cost to travel to Wurzburg?

How much money will you need for your trip to Wurzburg? You should plan to spend around €96 ($104) per day on your vacation in Wurzburg, which is the average daily price based on the expenses of other visitors. Past travelers have spent, on average, €28 ($30) on meals for one day and €6.31 ($6.86) on local transportation. Also, the average hotel price in Wurzburg for a couple is €126 ($137). So, a trip to Wurzburg for two people for one week costs on average €1,341 ($1,458). All of these average travel prices have been collected from other travelers to help you plan your own travel budget.

A vacation to Wurzburg for one week usually costs around €671 for one person. So, a trip to Wurzburg for two people costs around €1,341 for one week. A trip for two weeks for two people costs €2,683 in Wurzburg. If you're traveling as a family of three or four people, the price person often goes down because kid's tickets are cheaper and hotel rooms can be shared. If you travel slower over a longer period of time then your daily budget will also go down. Two people traveling together for one month in Wurzburg can often have a lower daily budget per person than one person traveling alone for one week.


How expensive is Wurzburg? How much money do I need for Wurzburg?

How much does a trip to Wurzburg cost? Is Wurzburg expensive? The average Wurzburg trip cost is broken down by category here. All of these Wurzburg prices are calculated from the budgets of real travelers.

Looking for a hotel in Wurzburg? Prices vary by location, date, season, and the level of luxury. See below for options.

How much does it cost to go to Wurzburg? Naturally, it depends on the dates. We recommend Kayak because they can find the best deals across all airlines.

The price of renting a car in Wurzburg will depends on dates, the type of car, the location, and your age. We recommend Kayak because they can find the best deals across all car rental companies.

Wurzburg On a Budget 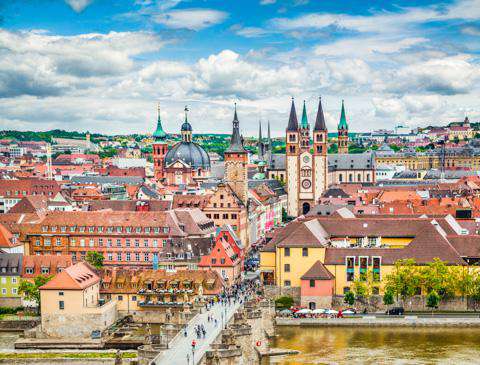 Wurzberg
Wurzburg is in Franconia, in northern Bavaria. The city dates back to the 10th century when it served as the home for many important prince-bishops. It is famous as the location of the Residence, which is considered one of the finest palaces in Europe. The city also has one of the oldest churches in Germany that was originally built in the 8th century. The fortress of Festung Marienberg surrounds the church. The city was heavily destroyed during bombings in 1945. About 80% of the city's buildings were destroyed, but it has been completely rebuilt today. Still, much of the original architecture has been lost.

Wurzburg has a temperate climate with four separate seasons. The hottest months are usually July and August when high temperatures hover around 22 degrees Celsius. This is also when most tourists visit the city, as the temperatures are pleasant and it is perfect for being outside. The coldest months are December and January. Lows at night are often below freezing. It can rain anytime of year, but winter months are prone to both rain and snow. August and September are the driest months.

Make sure you visit the Wurzburger Residence, which is one of the nicest palaces in all of Europe. It has a beautiful staircase which is rumored to be the largest in the world. The palace has been designated on the UNESCO World Heritage List. There are over 300 rooms in the entire palace which is divided into three wings. There is also a chapel which you can visit with the price of admission. You're also free to walk around the nice gardens which are behind the palace.

Also head to Festung Marienberg which offers beautiful views overlooking the city. The castle itself is free and open to the public but there is a museum with an entry fee. Much of the museum is in German so if you do not speak the language you will likely miss some important points.

Wurburg's Old Town is where you'll find the oldest buildings, outdoor cafes, and shopping areas. Grombuhl is near the railroad station and is a popular area for medical students because of the nearby medical campus. Lindleinsmuhle is near downtown but is more quiet and residential with some shopping areas. Frauenland is popular with students because of its proximity to the University of Hubland. The Sanderau is well connected with tram routes and Heidingsfeld is on the river Main in the southern part of the city. Heuchelhof is on the edge of the city. Other neighborhoods include Rottenbauer, Versbach, Durrbach and Lengfeld.

A popular time to head to Wurzburg is during the Wurzburger Weinfest which is one of the area's largest wine fairs. There's also the Africa Festival which highlights African culture and takes place every year in either May or June.

Food in Wurzburg is quite good and you'll find restaurants ranging from high end to budget cafes. The nicest restaurant is a few kilometers outside of town, called the Schloss Steinburg. It also offers great views of the area, and the food is delicious, so it is well worth the expensive price. There are also some very good and reasonably priced restaurants in the center of town.

Wurzburg also has a significant student population so you'll find many budget options catering to that crowd as well. These restaurants are mostly concentrated in the southern section of town on Sanderstrasse. Popular options include Unicafe, Cafe Muck, and Cafe Kult. There are also some decent Indian and Chinese restaurants. For Mexican food, head to Joe's and Enchilada.

You can easily rely on the city's public transportation system to explore most areas. It includes both buses and trams, but if you have your own car, driving is not difficult either. The trams run every seven to fifteen minutes and the buses usually run every twenty minutes. You can purchase tickets at any of the ticket machines, or from bus drivers. You cannot buy a ticket once you board a tram. There are day passes and family passes available. Family passes are good for two adults and up to four children under the age of 15. Bus route 9 connects the Residence and the Marienberg Festung by traveling through the city center. This is a convenient route for tourists. If you plan to drive, do pick up a map at a tourist information center before beginning your exploration though.

By backpackguru in Entertainment
Marienberg Fortress is a great place to wander around. You can get to the fortress by heading straight up a short path on the northeaster slope. It's the steepest climb, and the views aren't as great. If you're looking for something more gradual you can take a trail that wanders through the vineyards. It meanders it's way through the vineyards of Schlossberg and heads into the back gate of the fortress. It's a great way to truly experience the fortress and the surrounding areas.

You can pick up the trail behind the church of the St Burkhard. Head through the stairs in the back of the church courtyard. The trail starts at a little steep, but eventually begins to head through the vineyards. The views get better the higher you goes. In the begin it's graveled but eventually it becomes paved. It's a great way to spend a morning.