How much does it cost to travel to Fussen?

How much money will you need for your trip to Fussen? You should plan to spend around €168 ($183) per day on your vacation in Fussen, which is the average daily price based on the expenses of other visitors. Past travelers have spent, on average, €47 ($51) on meals for one day and €43 ($47) on local transportation. Also, the average hotel price in Fussen for a couple is €175 ($190). So, a trip to Fussen for two people for one week costs on average €2,356 ($2,562). All of these average travel prices have been collected from other travelers to help you plan your own travel budget.

A vacation to Fussen for one week usually costs around €1,178 for one person. So, a trip to Fussen for two people costs around €2,356 for one week. A trip for two weeks for two people costs €4,712 in Fussen. If you're traveling as a family of three or four people, the price person often goes down because kid's tickets are cheaper and hotel rooms can be shared. If you travel slower over a longer period of time then your daily budget will also go down. Two people traveling together for one month in Fussen can often have a lower daily budget per person than one person traveling alone for one week.


How expensive is Fussen? How much money do I need for Fussen?

How much does a trip to Fussen cost? Is Fussen expensive? The average Fussen trip cost is broken down by category here. All of these Fussen prices are calculated from the budgets of real travelers.

Looking for a hotel in Fussen? Prices vary by location, date, season, and the level of luxury. See below for options.

How much does it cost to go to Fussen? Naturally, it depends on the dates. We recommend Kayak because they can find the best deals across all airlines.

The price of renting a car in Fussen will depends on dates, the type of car, the location, and your age. We recommend Kayak because they can find the best deals across all car rental companies.

What did other people spend on Food in Fussen?

Typical prices for Food in Fussen are listed below. These actual costs are from real travelers and can give you an idea of the prices in Fussen, but your costs will vary based on your travel style.

The Best Hostels in Fussen (Near Neuschwanstein Castle)MunichNurembergWurzburgBambergLindau

Fussen On a Budget 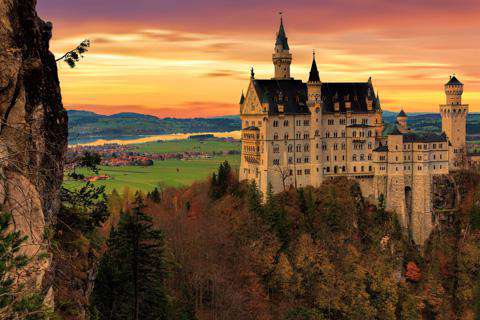 Neuschwanstein Castle
Fussen is a Bavarian town in Germany, just north of the Austrian border. Nestled at the foot of the Alps, tourist-busy Fussen is the southern climax of the Romantic Road, with the nearby castles of Neuschwanstein and Hohenschwangau the highlight of many southern Germany trips. But besiders the country's most popular tourist route and Ludwig II's fantasy palaces, there are other reasons to linger longer in the area. Fussen's Gothic castle, Hohes Schloss, houses a regional art museum that is well worth a visit. The museum of St. Mang's abbey showcases Fussen's violin- and lute-making industry that is quite interesting for many. Nearby Tegelberg mountain has a ski resort, a panoramic cable car, and an alpine slide- all of which make for a great day of adventure. The town of Fussen is worth exploration, and, from here, you can easily escape from the crowds into a landscape of gentle hiking trails and Alpine vistas.

Neuschwanstein Castele, the mother of all German castles is only 3 kilometers away from Fussen. This fairy-tale castle is well-known worldwide. Make sure to sit behind the driver while bussing to the castles. You can also walk to the castle, which is about 30 minutes' walk uphill. Be warned that taking photographs is prohibited inside the castle. There is no need to pay for the tickets if you are not interested in going inside the castle. You can go up to the castle and the bridge for free.

Hohenschwangau Castle, the castle directly across from Ludwig II's fairy-tale castle, served as Ludwig II's home while he was growing up. This is another famous castle on the Romantic Road and is part of many tourist trips to the fairy tale castle of Neuschwanstein.

See Wieskirche. This pilgrimage church, which is one of the world's great rococo masterpieces, is located only a ten-minute bus ride from Fussen in nearby Steingaden. A work of Dominikus Zimmermann and his brother Johann Baptist, it has been designated a UNESCO world cultural heritage site. Explore the Falkenstein castle ruins, a short distance from Fussen, near Pfronten.

Altstadt (Old town)
Fussen's pedestrianized Altstadt is the only neighborhood of interest to tourists. It is a pretty blend of brightly colored buildings, many of which are adorned with frescoes. The typical Bavarian architecture and cobblestoned streets gives the town an old world charm (the town is 700 years old) while it still offers all the services you'd expect in a modern town. Fuessen's Old Town, near the Austrian border, represents one of the best examples of a classic Bavarian old town. Winding streets and a collection of squares are laid out along the river Lech at the foot of the Alps. The High Palace, a well-preserved Gothic castle, rises above the surrounding buildings. The extensive monastery of St. Mang is home to the oldest fresco in the country. You can wander across the bridge for beautiful views of the historic sites on each bank. Stop for a traditional Bavarian dish or medieval-style specialty at one of the local restaurants. The town also hosts special events, festivals, and guided tours.

Take a trip to Tegelbergbahn for fabulous views of the Alps and the Forggensee. You can take this cable car to the top of the Tegelberg, a prime launch point for hang-gliders and parasailers. From here it's a wonderful hike down to the castles.

Below the Hohes Schloss, and integrated into the former Abbey of St Mang, the Museum Fussen highlights Fussen's heyday as a 16th-century violin-making center. You can also view the abbey's festive baroque rooms.

Take a giant slide to the adventure trails. Directly below the treetop walkway and right next to the German/Austrian Border is a giant slide and several "adventure trails" for exploring. At the bottom of the slide, you have the option of taking the Forest Trail or the Mountain Trail. Each trail has its own set of activities to do along the way. The trails are short and easily walkable.

Over 700 years old, the town of Fussen, near the royal palace of Neuschwanstein, offers a range of traditional and classic dishes. Cheese is often a central ingredient in these dishes, as the Allgau is one of the most famous cheese producing regions in Germany. All around Fussen there are still small cheese making dairies producing the handmade Allgau Emmentals and Allgau Alpine cheese. In Fussen's local Lehern dairy, visitors can enjoy a tour of the dairy, purchase specialty cheeses in the factory, shop and try some of the dairy's own cheeses in the on-site "Kasealp" restaurant. Those with a sweet tooth won't want to miss the "Sissi-Torte" in the Kurcafe in Fussen. It is a chocoholic's dream. The original recipe was created back in the 19th century especially for the Austrian Empress Elisabeth who often came to Hohenschwangau Palace to visit her cousin, King Ludwig II of Bavaria.

Munich is the closest major airport. Fussen is easily accessible by train. There are many connections between Fussen and Munich. Direct trains leave about every two hours. Bus may be the cheapest way to get there: Many bus tours are operated to Fussen from most parts of southern Bavaria, often including a visit of the fairy-tale castle Neuschwanstein. Fussen is accessible by car via the Romantic Road. It lies at the end of the famous path. Fussen is small enough that a car is not really needed. There is a bus to the castles and the trains to Munich and Augsburg and the old town is easy enough to access by foot. You can walk to Neuschwanstein and Hochschwangau castles via some marked roads. Another alternative is to rent a mountain bike. There are numerous shops, one even right at the train station. Fussen has invested a lot into developing a network of bike routes and paths to make biking easier.

By backpackguru in Entertainment
Everyone who visits Fussen has to visit Mad King Ludwig II's castle. This castle is most famous for it influence over the Walt Disney World castle. It was begun in 1869 but construction stopped when Ludwig died in 1886, only partially completed. The rooms are impressive and they occasionally have concerts in the concert hall.

The castle can be incredibly popular during peak season, so if you don't want to join a tour, make reservations at least a day in advance. It's easily worth the planning in advance so don't skip out on the site.