How much does it cost to travel to Key Largo?

How much money will you need for your trip to Key Largo? You should plan to spend around $170 per day on your vacation in Key Largo, which is the average daily price based on the expenses of other visitors. Past travelers have spent, on average, $48 on meals for one day and $45 on local transportation. Also, the average hotel price in Key Largo for a couple is $187. So, a trip to Key Largo for two people for one week costs on average $2,373. All of these average travel prices have been collected from other travelers to help you plan your own travel budget.

A vacation to Key Largo for one week usually costs around $1,187 for one person. So, a trip to Key Largo for two people costs around $2,373 for one week. A trip for two weeks for two people costs $4,747 in Key Largo. If you're traveling as a family of three or four people, the price person often goes down because kid's tickets are cheaper and hotel rooms can be shared. If you travel slower over a longer period of time then your daily budget will also go down. Two people traveling together for one month in Key Largo can often have a lower daily budget per person than one person traveling alone for one week.


How expensive is Key Largo? How much money do I need for Key Largo?

How much does a trip to Key Largo cost? Is Key Largo expensive? The average Key Largo trip cost is broken down by category here. All of these Key Largo prices are calculated from the budgets of real travelers.

Looking for a hotel in Key Largo? Prices vary by location, date, season, and the level of luxury. See below for options.

How much does it cost to go to Key Largo? Naturally, it depends on the dates. We recommend Kayak because they can find the best deals across all airlines.

The price of renting a car in Key Largo will depends on dates, the type of car, the location, and your age. We recommend Kayak because they can find the best deals across all car rental companies.

Key Largo On a Budget 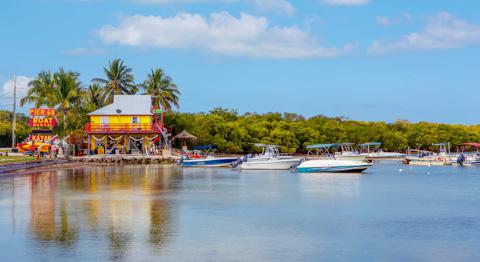 Key Largo, Florida
As the lustrous emerald waters ebb and flow against your sandy toes, you find yourself cooled by the gentle breeze as you bask under a golden sun. To you, it's paradise. To everyone else, it's Key Largo. Located in the northernmost of the Florida Keys, Key Largo is known as the dive capital of the world due to its well-preserved coral reefs and clear waters. Just an hour-drive from South Florida's major airports, Key Largo boasts in containing a vast biodiversity, such as tropical hardwoods, creeks, two state parks, a national park, and a portion of a national marine sanctuary. Besides its natural beauty, Key Largo is overflowing with top restaurants and chic boutiques. It is no wonder that Key Largo became a hotspot for Hollywood beach scenes, with even a movie holding its namesake! Whether you look to get your fun by land or by water, there is something for everyone at Key Largo!

Immerse yourself in the breathtaking scenery of Key Largo at Dagny Johnson Key Largo Hammock Botanical State Park. Dagny Johnson contains one of the largest tracts of West Indian tropical hardwood hammock in the United States. Protecting over 84 animal and plant species, you will be sure to encounter all types of wildlife from swallowtail butterflies and American crocodiles. Dagny Johnson has over six miles of varying nature trailers, proven especially useful for avid birdwatchers. As you saunter through this tropical wilderness, be sure to read up on the information about the park as well as its inhabitants as you bike, jog, or walk. Whether you seek for a new, lively venue for your picnic or simply want to embrace the wonders of nature, Dagny Johnson will surely not disappoint.

However, your enjoyment for nature does not simply have to go by foot. Jump into the cooling waters of the Atlantic and explore John Pennekamp Coral Reef State Park. Established in 1963, the park was named after the late John D. Pennekamp, a Miami newspaper editor, whose efforts in environmental conservation contributed to the establishments of many parks, including the Everglades National Park. Extending 3 miles into the Atlantic Ocean and approximately 25 miles in length, the park is known for its picturesque reefs, seabeds, and swamps. The park works more as an underwater museum due to its collection of historic sights beneath the water. Because of this, John Pennekamp was added to the National Register of Historic Places in 1972, with such sights including 4000-pound bronze sculpture of Jesus Christ and an authentic reconstruction of an early Spanish shipwreck. Explore the underwater magic of John Pennekamp by kayak, paddleboard, glass bottom boat, snorkeling and scuba diving.

Make an unforgettable memory and swim with the ocean's most playful creatures: the dolphin. At Dolphin Plus, you not only get to visit the homes of these aquatic inhabitants, but you get to learn and interact with them as well. Creating enriching programs to teach the young and old the wonders of the Atlantic, Dolphin Plus acquires a wide range of dolphin encounters. Such encounters include structured swims with the dolphins, guided dolphin tours, shallow water swims with the dolphins, and biology and trainer tours. Kiss, hug, dance, and even paint with these marvelous creatures in order to have an experience you will cherish in your years to come.

If you are looking for a place to wine, dine, and watch the sunset, be sure to make a pitstop at Sundowners Restaurant. Established in 1985, Sundowners has been a restaurant well known for its sunsets, sandwiches, steaks, and seafood across the Florida Bay. Sundowners allows its patrons to fully appreciate the beauties of Key Largo with its venues in the midst of Floridian nature, including its glass-walled dining room, covered deck, and tropical patio. Open from 11:00am to 10:00pm, Sundowners also is able to furnish parties and weddings. Some of their dishes include lobster bisque, onion encrusted mahi mahi, jumbo lump crabcake, blackwater pasta, filet mignon madagascar, and lightly blackened yellowtail. Be sure to book your reservation in advance as it is quite likely Sundowners will be packed!

As most businesses are located on US 1, navigating throughout Key Largo is as easy as a summer breeze. As the population is so small, Key Largo does not have centralized systems for buses or trains. There are a variety of taxicab services throughout the island, but can only be called, not flagged, such as Key Express Cab, Sea the Keys Taxi, and Keys Transportation and Shuttle Service. Key Largo also acquires a wide variety of rental car services including Enterprise, Budget, and Thrifty Car Rental. Whatever you decide to do in Key Largo, be sure to make the most out of its glistening waters and summer weather!