How much does it cost to travel to Pensacola?

How much money will you need for your trip to Pensacola? You should plan to spend around $157 per day on your vacation in Pensacola, which is the average daily price based on the expenses of other visitors. Past travelers have spent, on average, $40 on meals for one day and $51 on local transportation. Also, the average hotel price in Pensacola for a couple is $177. So, a trip to Pensacola for two people for one week costs on average $2,198. All of these average travel prices have been collected from other travelers to help you plan your own travel budget.

A vacation to Pensacola for one week usually costs around $1,099 for one person. So, a trip to Pensacola for two people costs around $2,198 for one week. A trip for two weeks for two people costs $4,397 in Pensacola. If you're traveling as a family of three or four people, the price person often goes down because kid's tickets are cheaper and hotel rooms can be shared. If you travel slower over a longer period of time then your daily budget will also go down. Two people traveling together for one month in Pensacola can often have a lower daily budget per person than one person traveling alone for one week.


How expensive is Pensacola? How much money do I need for Pensacola?

How much does a trip to Pensacola cost? Is Pensacola expensive? The average Pensacola trip cost is broken down by category here. All of these Pensacola prices are calculated from the budgets of real travelers.

Looking for a hotel in Pensacola? Prices vary by location, date, season, and the level of luxury. See below for options.

How much does it cost to go to Pensacola? Naturally, it depends on the dates. We recommend Kayak because they can find the best deals across all airlines.

The price of renting a car in Pensacola will depends on dates, the type of car, the location, and your age. We recommend Kayak because they can find the best deals across all car rental companies.

What did other people spend on Transportation in Pensacola?

Typical prices for Transportation in Pensacola are listed below. These actual costs are from real travelers and can give you an idea of the prices in Pensacola, but your costs will vary based on your travel style.

What did other people spend on Food in Pensacola?

Typical prices for Food in Pensacola are listed below. These actual costs are from real travelers and can give you an idea of the prices in Pensacola, but your costs will vary based on your travel style.

What did other people spend on Entertainment in Pensacola?

Typical prices for Entertainment in Pensacola are listed below. These actual costs are from real travelers and can give you an idea of the prices in Pensacola, but your costs will vary based on your travel style.

Pensacola On a Budget 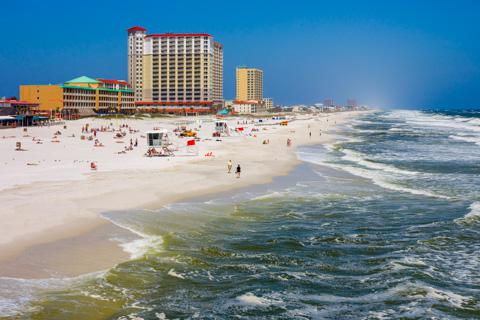 Pensacola, Florida
With sands as white as sugar grain and a sky devoid of grey clouds and innumerable downpours, Pensacola is known by many as the "Western Gate to the Sunshine State." Located in northern Florida, Pensacola is a waterfront city known for its pristine beaches and rich Floridian history. As one of the earliest European settlements in the U.S., Pensacola is riddled with museums and landmarks that commemorate the state's history, making the city quite appetizing for history buffs and students alike. However, if you are simply looking to get the most out of the all-around good weather of Florida, Pensacola's protected beaches complemented with high-class restaurants and stores make this a vacation capital for many.

If you are craving to shop until you drop while visiting Pensacola, the Cordova Mall provides an ample environment for all your consumer needs. Declared the largest and most upscale shopping center in the Pensacola area, Cordova Mall holds at least 120 stores, including LOFT, Chico's, Jos. A Bank, Sephora, The Buckle and Old Navy. If you are looking to equally satisfy your insatiable appetite, Cordova also furnishes innumerable restaurants, including Romano's Macaroni Grill, Panera Bread, Red Robin and Moe's Southwest Grill. Be sure to be on the look-out for exciting news and events of Cordova Mall to make your trip that much more exciting.

However, be sure to get the most out of your trip and stop at one of Pensacola's widely acclaimed beaches! Perdido Key State Park is one of the finest examples of Pensacola's wild and preserved shorelines. Protected from storms by barrier islands, Perdido Key provides a safe, sheltered habitat for shorebirds and other coastal animals. Perdido Key itself is a 247-acre barrier island on the Gulf of Mexico. With clear skies above and roaring oceans below, Perdido Key works as a favorite for swimmers and surfers alike. Besides its amazing beaches, Perdido Key also provides boardwalks and picnic tables to enhance your experience at the park to be a most memorable one.

If you are a baseball fan and happen to be stopping by in Pensacola, you cannot miss visiting the Blue Wahoos Stadium. Known as one of the most premier facilities in Minor League Baseball, the stadium was designed by Populous, a renowned company that has created outstanding facilities for Minor League Baseball, NFL, NBA and NHL. With the ability to hold 5,038 fans, the Blue Wahoos also works beyonds being an amazing stadium. Blue Wahoos is also able to host a wide arrange of events, including concerts, football games, and more. Be sure to do your research thoroughly and purchase your tickets before making a stop at this bustling and hustling stadium.

Pensacola also contains a multitude of first-class eateries to make for a fine dining experience you will never forget. Among them, Skopelos at New World works as one of the leading restaurants in serving the freshest Gulf Coast cuisine. Located in downtown Pensacola, Executive Chef and Director of Operations Gus Silivos brings in his Mediterranean influences to craft Floridian flavor in new and inspiring ways. Some of Skopelos most renowned dishes include carpetbagger steak, seared Pensacola red snapper, and scamp cervantes. Experience and taste Florida at Skopelos at New World.

Unfortunately, Pensacola is not as pedestrian friendly as other cities. It is agreed by most that driving is the far best option when exploring Pensacola. Besides it free and plentiful parking spaces, Pensacola offers all basic rental car services, including Hertz, Enterprise, and Avis. Pensacola also provides public transportation like the bus. However, the bus service doesn't serve the entire city and only operates during select hours. Taxis are also provided within the city, but can only be serviceable through calling the service prior to your trip. Whatever method of travel you decide to take, be sure to get the most out of your trip in Pensacola!

The Beach and Historic Downtown

By Bryan in Entertainment
The beautiful beaches of the Florida panhandle are an obvious attraction, but Pensacola has a lot of other things to see and do as well. First is the historic downtown area, which includes various museums, old churches, and historical buildings. Next is the Naval Air Station, much of which is open to the public. The Blue Angels often train here, and you can watch them train above the museum several times per month. They even sign autographs afterwards. There is also a large Naval Aviation Museum, the largest tourist destination in the area. Also on the grounds is Fort Barrancas, the very well preserved ruins of a historical fortress dating back to colonial times. Daily tours are offered, but during off times you can usually have most of the grounds to yourself.